Social media is now the fastest source of global news and the quickest way to share our views. The platforms we use to share all sorts of information are largely unregulated, so where do we draw the line on what constitutes news and what is opinion.

In the second instalment of her 3 part series, Lauren looks at the rise of social media and the pivotal role it plays in the spreading of propaganda, or the more commonly used term… Fake News.

A couple of years ago, the term ‘fake news’ was rarely used. In 2017, it was named ‘Word of the Year’. It is defined as ‘false, often sensational, information disseminated under the guise of news reporting’, a modern phenomenon (frequently related to political stories) that is seen as damaging to an individual or organisation. Social media plays a pivotal role in spreading this false information, which is shared and consumed around the globe.

Facebook and Twitter in particular have been under fire in the UK. Both platforms have been threatened with sanctions, rightly so! They should be doing more to combat fake news. After Facebook’s ‘Disputed Flags’ proved unsuccessful, they are now planning on changing their algorithms to provide a more meaningful interaction for users. Newsfeeds should present accurate information from reliable publishers that we can trust and learn from, rather than sensationalist clickbait, where we are second-guessing its authenticity. 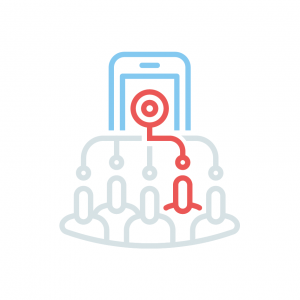 Facebook plan to start ranking news outlets in its feeds based on user evaluations of trustworthiness. Whilst this is a promising step in the right direction, is asking the general public to rank publishers the way to go? Social Media has made the spread of information faster than ever, but decisions made by other people could shift the balance of news that you become exposed to. I find this very concerning; whatever our ideals, I believe it is healthy to expose ourselves to opinions contrary to our own, forcing us to reflect on other people’s views. ‘Trustworthy’ is not an objective measure and does not mean ‘accurate’; there is no guarantee that people will favour or discredit news sources for the right reasons. Political bias, prejudice, emotions, genuine dislike etc. will drive their decisions, whether they intend it or not.

Twitter is also investigating its users’ accounts. So far it has discovered 3,814 IRA connected results and 50,258 bot accounts related to the Russian government. Twitter has stated that it is not in the ‘business of making its own judgments about what is true or false’. Meaning, the platform is not going to remove content because it is untrue. But, fake news not only involves the spread of misinformation, but also the intent to cause damage. So this brings into play the larger argument of censoring free speech versus genuinely preventing harm and the penetration of false, misleading information. A recent study shows that fake news spreads far faster than the truth, and it is not bots to blame, but people sharing. Researchers call for social platforms to take more responsibility for implementing safeguards, to reduce this growing problem and its damaging consequences.

Whilst the UK has set up a new national security unit to combat fake news, in the USA, the opposite is happening – Donald Trump’s recent tweet about the NHS being a prime example: 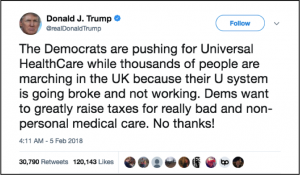 The purpose of the march in the UK was to save the NHS and ensure further funding, as people echoed ‘more staff, more beds, more funds’, but Trump’s tweet doesn’t fairly portray this at all! When people of power can post such falsity, Twitter cannot just sit back and say it is not their place to judge. Some alternative public protection is needed if ‘social media’ does not want to be judge and juror. 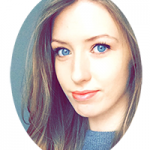 Lauren Atwell-Thomas
Studied Philosophy at the University of Reading
Loves American Football, travelling and buffalo wings!
Currently working towards a career in the civil service, specifically a future in public policy.