Q&A with a Film Camera Assistant

Ashton Born, a Clapper Loader and 2nd Assistant Camera, has been working his way up in the camera department since studying for a BA Film at the University of Westminster. He gives us some valuable insights into the world of film and shares his top tips if you’re interested in pursuing a career in this industry.

What is your role in the film industry?

My current job role is a Clapper Loader/2nd AC. I primarily work on short form productions like Commercials, Music Promos, Shorts, etc. I also work on Features & TV Dramas. I have been working professionally in the film industry for just under 3 years. 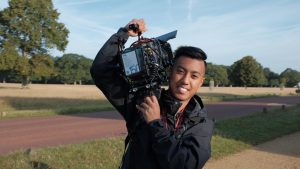 Do you think your degree has been helpful in securing a job, and during the course of your career?

My degree was indeed valuable to my career due to the fact that it laid the foundations for me to get my foot in the door, and has enabled me to work on many different productions. It taught me how a film crew works and how each department is indispensable to the others. I got to learn how to load film in my course, which has been invaluable to my role as a Loader; this helps me secure jobs with celluloid, where other camera assistants that don’t know the process, don’t get the work. And most importantly, university allowed me to meet people that I still work alongside within the industry. This was the biggest stepping-stone for me, because it is through them that I have got most of the opportunities throughout my career.

Why did you decide you wanted to go into camera?

I have always enjoyed filming things and I am aspiring to be a Director of Photography one day. The way the different roles work in the camera department is pretty inspiring both creatively and technically.

What are the key roles that make up the camera department on a film set?

The Director of Photography (DOP) is responsible for the look and image of a production. They work closely with the Director to create the feel of the product through lighting, framing and camera movement.

If the DOP is not operating a camera, they will get a Camera Operator on to direct their camera movements and framing. Occasionally, there are more specified operating roles where Steadicam Operators or Jib Operators take the helm.

The Focus Puller is the DOP’s right-hand man; they head up the technical side of the camera department. They are responsible for maintaining the camera lens’ optical focus on the subject or action that is being filmed. Besides this, Focus Pullers will not only build the camera, but they will generally oversee care for the camera package and get it ready on schedule.

Clapper Loaders are the backbone of camera department. We are responsible for loading the film stock into the camera magazines; we use a clapperboard to mark the take to help editors sync external recorded audio; we mark actors where necessary and we have to maintain all records and admin paperwork (report sheets/inventory) for the camera department. We work very closely with the Focus Puller, swapping lenses cautiously and making sure kit is well kept. When there is no Video Assist (which is majority of the time in the short form world), we are responsible for getting video feeds to the numerous monitors. This usually consists of Focus Pullers’, Director and Client monitors. This can either be done with wireless systems or be SDI wired; the former is more common due to the mobility of shoots and wireless usually speeds up moving orders.

Trainees will work with all members of the camera crew, predominantly with the Loader. Besides making hot drinks for camera crew, they aid in battery management, setting up monitors and help with camera reports. Depending on the size of the production, the scope of the job changes.

What are the routes into the camera department?

There are different ways of getting into the camera department. The most popular is to start off as a Camera Trainee and work your way up the ladder.

You could also start as a runner which is an entry level role into film/ TV, where you can meet different people in the camera department that might be able to give you some opportunities. Or you could work for a kit hire company, such as Shift 4, Pro Cam or VMI, where you can learn about all the kit and you may get opportunities to go out on set. 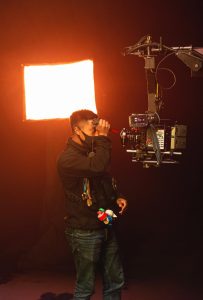 What is an average day in your current role?

The average hours on set are a 10+1 (11 hours with an hour for lunch). Firstly, when hired kit is all put into a shooting location, I would open all camera boxes and put them in a tidy manner for us camera assistants to work from. This is when the ACs start building camera, monitoring systems etc.

If it is a narrative shoot, when shooting commences, I will have my board ready by the camera and wait for the 1st AD (Assistant Director) to Turnover. This is where he’ll ask Sound & Camera to roll. I would then have my board in front of camera and say the slate and take numbers, before clapping and marking it.

At the end of the shooting day, I would have all the boxes open up again where necessary and start de-rigging the kit. After that, I would do a ‘nervous’ to check that the camera department have not left anything behind before leaving the shooting location.

They often say in creative industries that it’s not what you know, it’s who you know – how true have you found this to be?

It is very true: the bigger your network, the more opportunities you will have. However, being both likeable and knowledgeable increases your chances tenfold. When you first start, you may not know anyone – most people don’t. Once you are given your first opportunity, nurture the contacts that you make. As most work in film is freelance, almost every job you get will be as a result of a contact, so building relationships with others is absolutely vital.

What are the key differences between TV, commercials and features?

There are a few differences between working in TV, commercials and feature films. The main difference is the length of the job. In all genres, you could either be on the project from the start, perhaps working 6-day weeks (and 11-hour days), or you could be doing ‘dailies’ – which is as it sounds – you may be contracted for a specific day or several days. Commercials tend to be shorter, perhaps just a few days. Whereas, a feature film or TV drama can be months, often away from home in hotels. Some projects work in blocks, for example TV programmes may shoot one series at a time which could be 6 weeks on, with a couple of weeks off.

The other thing that affects the job is the budget. Higher-end and bigger budget features or commercials tend to have bigger crews. This probably means that you will have a more specific and smaller role. However, something like a low budget reality TV programme will have a much smaller crew – perhaps just one camera operator (who may also be a shooting producer) and therefore you would have to do everything from setting up the camera to filming too.

What is your favourite part of the industry/ job?

The best part is the people you get to work with. I have been fortunate to meet many exceptional camera crews and others from different departments. There are many shoots that I’ve thoroughly enjoyed, but a recent one that comes to mind was a Feature that I worked on for five weeks in Scotland called ‘Kingslayer’. It was an exceptional experience with a brilliant crew. I stepped up to Focus Pull on this for the one and only Doug Milsome BSC, ASC (Full Metal Jacket, Robin Hood: Prince of Thieves, Breakdown). He is a true idol who really inspires me and I will cherish this experience for the rest of my life.

What are the challenges?

It can be tough being freelance, as some of these productions can be fairly last minute. Therefore, it can be difficult to make plans at times. There are agencies or diary services that you can join, such as CallBox or Red, which can help you to get more consistent work, but there is a small fee and they may require certain credits in the film industry.

Shooting days are often very long and you will be carrying heavy kit, so it can be exhausting. Be prepared for 6am call times and not getting home until late at night, before going again the next day. Wet weather is the worst part: having to cover all the gear and making sure kit is kept dry is a necessity. You do not want to damage camera kit, as it will cost you an arm and a leg!

What tips do you have for someone wanting to join the camera department?

The main thing is to be a great person to be around. You can be really good at your job, but if you lack the personality to bond with the crew, they will look for someone else for future productions. However, if you’re enthusiastic and efficient, more opportunities will arise.

Make sure you keep an open mind and ask questions where necessary. If you do not know what the loader is asking of you, DO NOT BLAG IT, just ask for clarification and they’ll be more than happy to guide you in the right direction.

What does success mean to you?

If I am still working at the age of 82 like Doug Milsome in 2020, that is the ultimate success for me.

If you’re interested in current pay rates for the various roles in the film industry, click here.

Top Tips for a TV Runner: My Day at the Royal Wedding!
Jess secured the internship of a lifetime, as a TV runner at the royal wedding (Prince Harry & Meghan)

Grad Bites: How to Nail Networking
Ashton points out the importance of networking, so watch this video for some tips on how to make a start