Charli is a recent graduate from Westminster University, where she studied Television Production. She gives a lighthearted but helpful account of her first time working on a film set. Whilst she thoroughly enjoyed it, if she had known what to expect, the experience might have gone a little smoother…! 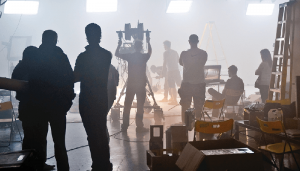 Having worked in TV and online content for the past year, when offered the chance to work on a feature film, I jumped at the chance! I was lucky enough to be recommended to the production manager by a 3rd AD (Assistant Director) whom I had previously worked with. I’m aware that many people spend years trying to get into film, so I could not turn down this fantastic opportunity.
Having spent the past month fully immersed in the film world, here are 5 things I wish I had known beforehand…!

It is not as glamorous as it sounds!

As a runner, which is the entry level role that any newbie would find themselves working in, you will likely find yourself questioning why you signed up to this at times – perhaps when you are emptying the bins at the end of the day to help the locations department, or struggling to put an easy-up (not easy!!) in the pouring rain for the director to sit under, or trying to source some unusual food for the lead actor or a strange elusive prop for the art department. However, that being said, you will end up with some crazy stories to tell your grandchildren!

There’s a walkie talkie lingo you need to know

There’s such a thing as comms (walkie talkie) language, which can be baffling when you arrive on your first film set! Here are a few phrases I wish I’d known before hearing them for the first time at work, some more obvious than others!

There are a few essentials that every runner should have in their bum bag:

Obviously, if you are working with an actor who is a bit of a diva, it can be slightly frustrating. But I found that looking after even the nicest of actors can be difficult – they may be the ones that never ask for anything – so you have to figure out for yourself what it is that they want! This is definitely harder than them just outright telling you!

It is more than a job

When you are working on a long form (long contract) feature film, it will consume your life for that period, even as a runner.
From the day you start, and every day following, all you will think about is this job. You’ll probably even dream about it!
But, the most important thing to remember (which is not just important to working in the film industry, but is more noticeable when people are pushed to their extremes due to the 12 hour+ days, often for months at a time, and particularly in the cold and rain of night shoots in November in England), is that everyone has something going on in their personal lives or pressure from those above them. This can definitely affect the way they treat you. So, you should never take anything personally and always retain your patience. This will get you through to the end of the job!

Asking for Money as a New Freelancer or New Business »