We’re delighted to announce the winners of our Content Maker’s Award, the theme was ‘going it alone’. Here is Rosalie’s play, she won Most Original Interpretation. 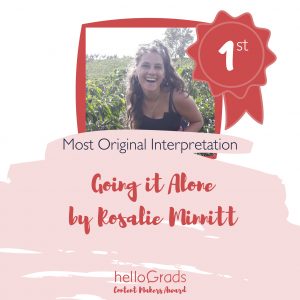 My name is Rosalie, I studied History at Durham and after wavering for a few years have finally moved to London and am currently working for a wonderful charity.

I am also a writer and comedian and after a bit of self exploration that took me on a strange journey from Bogota to New Orleans, I realised life was too short to be scared of at least trying to do what I love. I left my fears and hang ups behind me and have burst into this new year with purpose and ambition.  I did my first stand up open mic; I won a place on a writing course at Soho Theatre and got my first paid writing commission published.

The piece I have chosen to submit is the end of a play I was writing last year. It follows a girl, Anna, who is trying to figure out her place in the world and in her quest for purpose decides to create a podcast where she interviews self proclaimed ‘experts’. Needless to say this expertise is dubious at best and the play follows her strange and surreal interviews. She ends up only having one listener, James, who, it soon transpires, needed the podcast more than she knew. This extract is from the last scene where he has asked to meet up face-to-face so he can somewhat sheepishly thank her for the show and it’s unintended consequence.

It seems like a bleak end, especially since the rest of the play is a comedy, but it seemed the most relevant to the ‘going it alone’ brief.

J: Why d’you even start it, if you think that?

A: Well, odd year I suppose.

A: No. Look, that sounds stupid, but I needed noise.

A: Yeah, like I’m living at home and stuff, and like my job, well it’s just something to do until I find a ‘real’ one, but no real one wants me at the moment. So. And working in a café is fine but I’m just really terrible at it.

A: I’m just all limbs. I’m like the Chuckle Brothers combined. They’ve started taking broken plates out of my pay-check.

[James moves her cup away from the edge and smiles]

A: Very funny. But, yeah. And my friends all moved away from home to new jobs or away away, so I – I got a bit bored and the podcast idea sort of filled in those gaps. I’m sorry, I’m oversharing. I hate it when people do that.

A: Usually only talk to strangers on trains.

I just didn’t like stuff anymore? Until the show. And it was good that I was doing something instead of being…still.

A: I was just taking really long baths because I didn’t really have anything else to do and went to bed early because the days were too long.

I didn’t want to see people from home or people with their jobs and their lives because I was so terrified, absolutely terrified that they were going to ask me what I was doing. And if I told them the truth I would have had to say, “I’m actually doing nothing”, and they’d look at me all concerned, and I’d say “Yeah. Nothing. I’m doing absolutely nothing and instead just wasting away my hours and days and minutes being panicked and stationary and insignificant and anxious about not knowing.”

That’s what I’d have to say.

One Sunday, this is kind of funny but, well strap-in. I-I ended up just like wandering around this little shopping centre. And I think I was in therefor like four hours, or something? Maybe more? I don’t even know. I didn’t buy anything, and I was just walking around and around and around for, like, age? Because it was something to do. And then this song came on and I just stopped and just, like, froze. Something cheesy and shit with Sheeran-Ariana stupid words about love and flying high and being brave. Suddenly there were just tears and tears and tears. Streaming. I was annoyed some bullshit lyric just tripped me up and the flood gates fully opened. And, look, I never cry, ok? Like never. I usually ONLY laugh which probably isn’t totally healthy either but never tears, not crying. I know you don’t know me but that’s not me.

J: I don’t either really.

A: Then this old man came along and asked if I was okay and I said ‘yes, ‘I’m fine, thank you’ and he said “Are you sure?” and I said “Yes, thank you”, but kinda screamed it and he looked scared, so I panicked and said “Sorry”, but then that came out even louder than the first one, and much even more alarming, so people started to turn around and look then I realised that he looked like the guy with the spade from Home Alone.

A: Yeah! So, I laughed which was fine, but then I kept laughing, which was less fine and made me seem insane and I was so embarrassed I just ran out screaming like Kevin.

[Both look at each other and start laughing.]

A: God, yeah. Thanks for listening.

A: No, to my show. Because it meant I made more, and the days didn’t feel long.

A: God, look at me?! I’ve been moaning for ages. Should’ve stopped me. I’m just being silly and feeling sorry for myself. What’s your story then?

A: Were people weird?

J: I also sort of stopped going and.

Guess I got ‘still’ too. Just happy that I could listen to you being really bloody weird. You made me laugh.

A: I’m just a bit surprised that listening to it helped!

A: Well, I would’ve thought an hour-long interview with a ghost hunter or Andy Serkis’ number one fan would push anyone off the edge.

J: Pulled me back, if anything.

A: Well, if weird is your medicine then –

J: It is weird. But I’d prescribe it to everyone.

A: Never become a therapist!

A: I didn’t do the podcast anymore after that. It had done its job. Filled that gap. But I realised it wasn’t the anchor I thought it was. It was a distraction and I was still drifting.

J: Looking back, it felt dramatic to meet up. Very Catfish, but I was happy I told her what she had done for me.

A: But I was glad that it had helped someone else.

A: He helped me too.

J: I ended up going away for a while.

A: I managed to move out. Yay!

J: I found some space.

A: I started doing yoga. Badly, but it sounds good when I say it.

A: I realised I didn’t have to have everything sorted to be happy. And I try to smile as much as I can now and when I don’t want to smile and I just force myself to laugh, hard, or find something that will.

J: We started writing letters instead.

A: Even though we weren’t ever really mates.

J: I wrote about my new job and how small my new flat was.

A: I sent postcards.

J: But I’m beginning to feel like myself again.

A: I don’t know if we’ll actually ever see each other again.

J: But I really hope we do. The last letter I got from Anna was a short one. She said:

A: ‘Sorry this is so late! Things have been so busy! Wherever you are, I really hope you’re happy and laughing and surrounded by good people’.

Why we love this piece:

Some lovely moments – the song lyrics just making her cry felt very raw and relatable. Brilliantly builds tension. There’s plenty at play beneath the speech: you sense both characters have rich inner lives. We like the way she’s being honest about her feelings and manages to help a stranger, it seems she is speaking to someone who may have really needed to hear her story. So sharing it has helped someone else. Great to read it in play format, we want to see it in action too!