Q & A… Ambassador for CALM 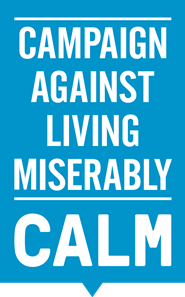 Rikesh Chauhan (RKZ – pronounced Ricks) is a successful musician, photographer and creative. We asked him about the charity and his role as an ambassador.

Suicide is the biggest killer of men under 45 in the UK, in fact over three quarters of suicides are committed by men, so it’s very much a gender issue. But until recently, no one talked about it. CALM made it more accessible.

Being diagnosed with mental health problems used to be scary and intimidating. CALM basically humanised it. They targeted men like myself through the arts, broke down the stigma, and made people realise that they weren’t the only one going through a hard time.’

Why did you get involved with the charity?

‘I joined as one of their first ambassadors in 2011, when they were a relatively small organisation.
At that time, mental health charities consisted of The Samaritans or NHS, I felt like they were for people much older than me. CALM was the first I’d seen focussing on people my age (21), and I felt they were trying to speak directly to me. I was interested in finding out more about the concept.

It was upsetting to learn how little people knew about male depression. Yet everyone knows that men don’t talk about their feelings. How are they supposed to get anything out of their system, if they keep it all bottled up? So it seems obvious that mental health would be a big issue.

There’s so much that guys get burdened with, dealing with generational issues, relationships, jobs, finances. The whole concept of masculinity – men are expected to drink beer, watch football, never talk about their emotions…it’s ridiculous! That really resonated with me and I wanted to help raise awareness of the problems.’

Tell us about your role as an ambassador

‘Initially my role was to talk about mental health to my mates, my peers, people who follow my music. I feel very lucky to have the opportunity to speak to people who want to listen, so if I’m not using that to say something good, then it’s just a waste. It gave me a lot more purpose in everything I do.

Then you talk to literally every other guy mate and they say ‘Yeah, I feel the same way’… it was totally insane!
As ambassadors, we try to raise awareness and promote everything that CALM is about, because it’s such an important cause. I’ve done music gigs, written online articles and for their magazine the CALMzine.’

Princes Harry and William have recently spoken out about mental health – do you think that has that helped young men?

‘Massively! CALM is part of the Heads Together foundation, coordinated by the Duke and Duchess of Cambridge and Prince Harry. So it’s a huge help having their support.

And other people too – Professor Green, who’s a patron of the charity, David Baddiel, partnering with Top Man and Lynx. People who have a voice obviously help enormously. But it doesn’t really matter who it is, anyone speaking about the charity, even if they get just one person to listen to them, that’s incredible.

Having the royal family involved has exponentially increased the amount of people hearing what we have to say. You couldn’t really ask for anything more! Yeah, it’s been an incredible couple of years for CALM.’

Is the charity just for men?

‘No, it’s open to everyone. There is clearly a gender issue. Men are a lot more likely to keep things bottled up, which is why CALM is here. So the majority of stuff is aimed at men.

But if anyone is going through problems, I’d highly recommend they browse the CALM website.
They have helplines and webchat.

The site is very informative, with advice on how to deal with things, or how to help a loved one who is suffering.
It’s actually really comforting. You read all these first hand accounts and think: “OK, that’s exactly what I’m going through.”

And when you see so many of these accounts, you realise: “Wow, I’m really not the only one going through this stuff.” It does make you feel better. And it’s all written by young people, so it’s very much within their psyche.

What’s the reason for linking with the arts?

‘The arts are a great outlet for people dealing with tough times. A release. Arts are essentially expression, and expression is the one thing that guys tend not to do. But whereas some people can’t talk, they’ll communicate how they’re feeling through a piece of artwork, a song, graffiti.

CALM helps men of all ages, but initially their demographic was young people. So they worked with DJs, graffiti artists, poets, musicians and rappers like myself. They involved writers, journalists, any form of expression. They wanted to reach those people who suffer, but don’t really know how or what to say. They have a voice through what they do. And as much as that’s great, it is therapeutic, it does help, but ultimately, it doesn’t give the additional support that might be needed.

I think that’s something that sets CALM apart from other charities. That’s how they got my attention. They channel discussion through the arts.

Nathan Bowen is a prominent graffiti artist, you see his work all over London. He created a cover for CALMzine, and that reaches so many more people. Every issue is designed by an artist, it features artists, it’s distributed through Topman to incorporate the fashion element … it’s really cool.

CALM have a very good approach. They get to the people that they need to reach. It just makes a lot of sense.’

CALM offers information, support & solidarity to men of all ages who are down & need help. They cover a whole host of issues including anxiety, alcohol & drugs, depression, eating disorders, financial stress, suicide etc.

The charity is targeted at men, but they will help anyone calling within the UK – no one is turned away.

Online, including webchat service: the CALMzone

Find out more on dealing with stress & problems

Grad Bites: Dealing with Stress – Mindfulness
Claire Derry talks about mindfulness and meditation, and how they can help reduce stress.

SOS
Where to go for Professional Help

Find out more about Rikesh

Visit his website for more of his music, photography and information about other projects – RKZUK.com