Over the next few days we will hear from recent graduate Henry to get an insight into his experiences since leaving university. After studying Human Geography at Leeds University, Henry has been travelling around South America for 6 months. He has recently returned and is now looking for a permanent job. Let’s hear what life has been like as a job-hunting grad…

Henry talks about the benefits of going travelling after uni and what he’s been doing to find a job since he returned.

How did you feel when you left university?

I was excited and ready for a new challenge. The last year of uni was quite stressful because of the workload, so once that was finished I was ready to start a new chapter. I had thought about what I wanted to do when I left uni, but I still wasn’t really sure. So, I decided to take the opportunity to travel to South America. I worked for 6 months before that in various jobs to earn money. I saved almost everything I earned and then went away.

Since returning from travelling, is life what you thought it would be?

In short, I would have to say no! I’ve been back a few months now and I’m still job hunting. Although I guess in some ways it is kind of what I expected. I’ve obviously heard it’s hard to get a job after uni and I knew I wouldn’t walk straight into something, but I thought I was employable enough and that it would be OK. I definitely (maybe naively) thought I would have a job by now.

I am aware though that I’m quite picky. A lot of my friends are just doing any job for the sake of earning money. But, I would rather concentrate on finding something that I really want to do. That’s a choice I am making, but it’s one reason I think I’m struggling.

What’s been the most fun part?

The most fun part was obviously being able to go away for such a long time. It was really rewarding. I did have to slave away before, which wasn’t great fun as I was away from my friends and because I was saving money I couldn’t really afford to socialise. But that meant once I was away, I was able to really enjoy myself, as I had managed to save a significant amount of money. So it was all worth it! I would definitely recommend travelling after university to someone who isn’t 100 percent sure on what they want to do. It gave me the opportunity to reflect on what I wanted.

Obviously the actual travel was an incredible experience too. Exploring eight countries across South America up to Panama is something I will never forget. I got to experience a variety of cultures, meet some great new people and see some amazing world heritage sites. My favourite were the salt flats in Bolivia and Machu Pichu in Peru. South America has a lot of really cool places to visit. 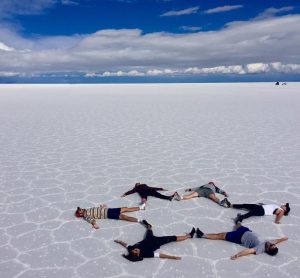 What’s been the hardest part?

To start with, it was definitely the contrast of leaving university and starting work in a relatively mundane job. Now, it’s the monotony of job hunting. It’s quite repetitive because it’s a lot of the same stuff and it’s quite hard to motivate yourself in a way. You don’t have deadlines like you do at university, so it’s hard to make yourself start ‘working’ and if you don’t, you can find yourself literally doing nothing.

So, how are you motivating yourself?

I am setting myself daily and weekly goals and making lists of things to do. I’ve also made a spreadsheet of the companies I’ve contacted – when, how and who I’ve spoken to. I’ve found being organised helps me to stay more motivated.

What support have you been using?

I am very lucky that my family is very helpful. I’ve had a mixture of advice from my parents (who have years of experience) and my older siblings (who are a bit more familiar with my situation). I’ve asked for general advice on making decisions about my future, to advice on my CV, cover letters & job applications. I generally will do things myself and then ask them to have a look at whatever I’m doing. I always find it helpful to get a second opinion.

Other than that, I have been meeting anyone and everyone that I know that has experience in the industries I’m interested in. I’ve been speaking to various people about what I want to do in social situations and then followed up with them to get contacts etc. I’ve also messaged people I know who are about 5 or so years older (mainly my siblings’ friends) who are quite settled in their industry. I’ve then organised to meet for a coffee and chatted about how I can get my career started and just getting general advice really. I’ve been pleasantly surprised how willing people are to help.

Henry tells us more about job applications and how he’s been contacting companies.