Q & A… Hear from Musicians

To celebrate creatives, we contacted some professional musicians to find out what it’s like to make a living from something you’re really passionate about.

Our respondents include classical chamber music and orchestral musicians, an opera singer and an R&B singer-songwriter.  Most are freelance, and as well as performing, they are employed in other roles – teaching, coaching or running workshops, photography and video production, printing, social media, coordinating concerts and festivals. 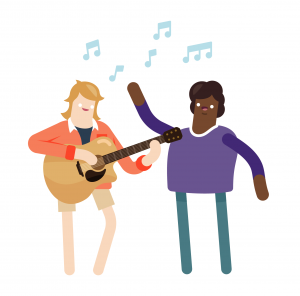 What is it that you love about music?  Why did you decide to make a life of it?

‘The feeling of being able to create and express oneself whilst being a part of a team is amazing. I couldn’t imagine doing anything else.’   (Josh)

‘I just love to hear music and I like the feeling of playing.’   (Katherine)

Many of the responses were altruistic, relating to the positive impact music can have on other people:

‘Music speaks to people universally, regardless of their backgrounds. It brings people together.’   (John Henry)

‘I like talking to people through music.  I feel it can make a big difference to people, especially when I do my education community work.  My most rewarding experiences include engaging musically with severely autistic children and having great fun with dear Patsy and a drum in a Plymouth nursing home.’  (Katherine)

Rikesh spoke on a similar theme; he is an ambassador for the men’s health charity CALM, and we asked him why the charity tackles mental health through the arts and music.
‘The arts are essentially expression, and expression is the one thing that guys tend not to do. Some people might not talk, but they’ll be able to communicate how they’re feeling through a piece of graffiti, a piece of artwork or a piece of music. It’s an outlet, a release. We provide cool activities, and we can channel discussion through the arts.’

What qualities are necessary for a musician?

Not surprisingly, the characteristics most mentioned relate to dedication, patience, determination and resilience.
‘The ability to draw from something inside yourself and still play with enthusiasm and relish when you’re feeling a bit rubbish.’   (Josh)
Musicians tend to work all over the country and abroad, with different people and styles of music. Whilst that’s a positive feature of a musical career, they all say it requires versatility and plenty of energy.

‘It helps to be emotionally intuitive, pick up quickly on people’s emotions. And you need to be a bit of a show off.’  (Katherine)

‘It’s vital that you enjoy working as part of a team.’   (Kate)
Musical talent and creativity are clearly key to a successful career. Simon also says sight-reading ability has been an invaluable tool and believes that’s why so much work (including film soundtracks) comes to UK choirs and orchestras: ‘We’re able to pick up the music and perform it correctly at sight, or at least after a bare minimum of rehearsal.  The reason for this skill?  Money.  Compared to working abroad, where there seems to be plenty of funding for long leisurely rehearsal periods, in the UK there’s never been enough for the luxury of rehearsals, so we’ve just become really efficient at using what little time we have!’

What factors have particularly helped your career?  (Apart from talent of course!)

Several people credited the influence of other musicians:

‘A very good first teacher, and I have been fortunate to play chamber music with truly inspired and great musicians all the way along.’  (Katherine)

‘Hard work! And working with people who make me feel positive.’  (Josh)

‘You get creative inspiration from composers, performers and colleagues…’  (John Henry)
Most mentioned the importance of networking in the creative world:

‘Networking is the whole reason I have a career!’  (Rikesh)
He thinks the best thing about his Commercial Music degree course was the fact it was run by musicians: ‘There was a 2nd game plan – yes educate, learn things, but make friends with the tutors because they’re going to come in handy.  That proved really fruitful, and I’m still in touch with a lot of my tutors when it comes to music advice…that’s been incredibly helpful.’

‘I can trace my network of employment from my very first job, singing with a cathedral choir; one of my colleagues was a “fixer” who employed me in a couple of other professional choirs.  (A fixer books musicians/singers for certain orchestras/choirs/performances).  That brought me into contact with other fixers, and so the web spread out, eventually providing me with a decent living as a freelance singer.’   (Simon)

‘Networking is important, but I really believe the best approach is to be memorable for being well prepared and nice to be around, not throwing business cards at your colleagues.  The exception is where concert promoters attend performances, and then you can be more proactive.’  (Josh)

What do you most enjoy about your job?

The first comment from almost everyone was that they love the variety in their music career:

‘The variety and the challenges of maintaining many different strands of work.  This month I’ll teach cello and piano, give workshops, perform in orchestral concerts, arrange recitals and get on more trains than I care to mention.’  (Josh)

‘I like the way I can keep developing, and how music has led me into other things – spoken word, video and photography.’   (Rikesh)

‘In addition to London opera, and professional choirs which toured the UK and abroad, I’ve had the chance to sing on recordings (classical and pop), and in film soundtrack sessions.  The diversity of opportunities means a classically trained singer like me would seldom be out of work.’   (Simon)

‘I love the huge variety – concerts, workshopping, teaching and coaching.  Playing with all sorts of musicians in many styles of music.  Every day is different.’  (Kate)
Working with other musicians plays a big part in job satisfaction:

‘You get to hang out with cool people and go to great places!’  (Findlay)

‘I enjoy getting to know other musicians very well.   Music and the experiences connect us all very strongly.’  (Katherine)
They appreciate the freedom to shape their own careers and select work they enjoy:

‘It’s important that I can follow my creative instincts and interests.  I’m very blessed to be able to do only the things I love, and earn money along the way.’  (John Henry)

Speaking of her funnier work experiences, Katherine (clarinettist) says she was employed by the Territorial Army to play music and belly dance up in the highlands for a troop on a training camp.  ‘I also often work for the Boxwood society and play music on boxwood clarinets whilst they plant over 600 trees on steep hillsides.’

What are your best or proudest moments?

‘I enjoy the appreciation and recognition that comes with performing.’  (Findlay)

‘Playing to sell-out crowds and getting a song in the iTunes charts.’  (Rikesh)

‘Success for me means enthusiastic applause and being asked to play again.’  (Josh)

‘A young lad I taught was labelled “the naughtiest boy in the school;” a year later he performed a solo in front of the whole school, and had the staff in tears.’  (Kate)

‘Having a baby!  Playing doesn’t make me proud, I just enjoy sharing the moment.’  (John Henry)

What are the downsides/challenges of a career in the arts?

Most of the frustrations relate to the whole business of freelancing, with its inconsistent workload and income.

‘The work often feels a bit all or nothing.  You can be furiously busy for weeks, then suddenly have nothing on.  Hard not to feel a bit down in the dumps at this point, and then the guilt for not practising kicks in!’  (Josh)

‘You don’t always have a steady income’  (Josh)  and ‘I hate chasing payments.’’  (Katherine)

‘Young artists coming out of music colleges now have to be much more proactive and resourceful.  Many combine a performing career with a busy teaching practice, and some will out of necessity, have a parallel career.
The life of a performing artist in the UK is a difficult one, and few of us will get to the well-paid top of our profession. For those who do, the pressures are immense.  Meanwhile, those of us still struggling along in the foothills must be aware of the changing nature of the artistic world, and the need to diversify and reinvent ourselves.’  (Simon)
Whilst most enjoy the travelling, it can have its downsides:

‘Being away from home, it can be tough on relationships.’  (Lucy)

‘Travelling about 10 hours in total to give a 45 min workshop in Newcastle!’  (Josh)
Finding time to practise, or to develop skills can be a challenge:

‘In my work, the extremes of skills used mean it’s tricky to keep on top of your game in every area simultaneously.’  (John Henry)

‘The lack of support to develop playing once you’re working.’   (Katherine)
‘Auditions! At the moment, I’m doing as many as possible.  Some are good, some are bad.  It’s important not to be disheartened and to keep focussing on how to improve for yourself, and not for external reasons.’  (Josh)

Katherine suggests ‘Practise auditions by going abroad where people don’t know you.’
Katherine feels that sexism is still apparent in much of the orchestral world.

Is there anything you particularly hope to do or achieve in life?

Unlike the dozens of people we have recently interviewed, almost all the musicians replied they would like to do ‘more of the same’, or that they just wanted to get better at what they are doing – which suggests a high degree of job satisfaction when your passion = your career!

‘I like the way things are going actually.  I love the variety.’  (Rikesh)

And finally, what tips would you give to someone considering music as a career?

‘If you have specific ideas about how you should earn money, do something else.   If you’re willing to adapt and you like variety, it’s probably good for you.’   (John Henry)

‘Its very rewarding, but be adaptable and do everything.  Especially develop your education techniques.’  (Katherine)

‘Be prepared for anything.  Treat your colleagues well.  Stay positive. And enjoy yourself!’    (Kate)

‘Work hard.  Be sure you want it.  Actively seek opportunities.  And don’t be afraid to know and go with whatever makes you “you”.’  (Josh)

‘Do the best you possibly can…and then do it better.’  (Rikesh)

There is a union for musicians, which may be a useful source for advice, networking etc.

Music Advice from the BBC

Advice for musicians and unsigned artists. From starting out to recording, playing live, choosing a record deal and building an online fanbase

Do What You Love…or Love What You Do? »
See all comments