On the 13th August it’s National Prosecco Day! Whilst you enjoy a glass of bubbly, enjoy these fun facts about Prosecco from our resident wine blogger and enthusiast, Emily. 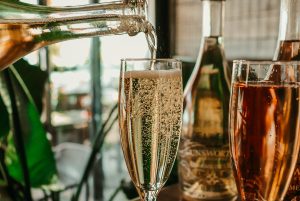 1. Unlike Champagne, which is fermented in the bottle, using the labour intensive ‘traditional method’ that make it really expensive to produce and therefore to buy, Prosecco is made using the ‘tank method’, also called the Martinotti or Charmat method. Fermenting wine in stainless steel tanks means it’s cheaper to produce and therefore cheaper to buy. Tank method gives it lighter, frothier bubbles than sparkling wines made using the traditional method, but it won’t have the bready, yeasty, brioche notes that so many people like in traditional method sparkling wines.

2. Prosecco is a beautiful place in Italy – not far from Venice in a suburb of Trieste – and wine made here is mostly from the Glera grape, which (confusingly) can also be referred to as ‘Prosecco’. It has notes of pear, green apple, blossom, melon and honey, and it can be made dry or sweet. Also confusingly, it doesn’t have to be made in Prosecco to be called Prosecco, it just has to be 85% Glera, and sparkling.

3. Until very recently, Prosecco had to be white. But the rules have changed and you’ll now see rosé versions for sale in UK supermarkets. Glera is a white grape, so this rosé is made from 85% Glera and 15% Pinot Noir, like this £8.50 bottle from Tesco. The pinot noir grape skins lend the wine its pale pink colour.

4. The yummiest Prosecco I’ve tasted recently was wheeled out at a BBQ. It was only £7.99 bottle from Waitrose – bargain! If you’re looking for higher quality bottle, look for the letters DOCG on the label. It’s still not ludicrously expensive to enjoy even premium Proseccos: for example this DOCG from Waitrose is only £11.99. Top producers of Prosecco include Conegliano and Valdobbiadene, so look out for these words on the label, as well as the word ‘Superiore’ if you want the premium stuff.

Get to Know Cardiff »